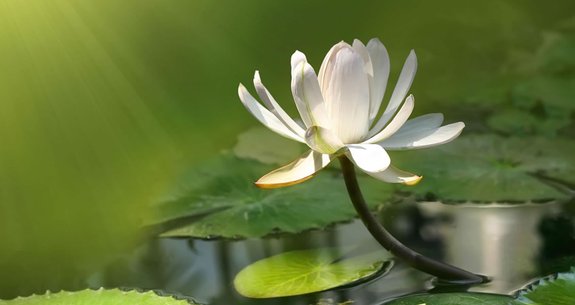 Placed unexpectedly by the generosity of life with young rebels, who had become drop-outs because of their painful journeys, I realized that the power of generosity and beauty was intact in them. This revelation needed to be shared with those youngsters, but they were resisting every outside knowledge, even if it was benevolant, I had  to make their power appear to them.

I had the intuition that there, in this restored and shared dignity is the lever of their reintegration not only socially but also and perhaps especially personally: to become the being of my talents, to update my potentials, to shine where I am and thus allow others to shine.

This is the origin of my quest that has far exceeded its goal! I wanted to help my students, in social and academic difficulty, to regain self-confidence, a sine qua non of their learning ability. I discovered a practice for all that updates the treasures coiled in each person and restores dignity.

Among the many speakers we invited, the meeting with Ngo Semzara Kabuta struck me as lightning of autopanegyric in his native village of Zaire and put me on the trail of selfpraise.

Then came the research of genesis (s) and universality with Jerome Rothenberg and his Technicians of the Sacred (1) in particular. With him I discovered that these auroral texts are  present everywhere, at the origin of the first written traces.

My personal journey is clearly marked by my attraction to places bubbling with innovative thoughts. Very early on, the school of Palo Alto imbibed my thought and my determination, long before we entered what Michel Serres describes as a new paradigm: the area inaugurated by the arrival of the internet. What a chance to live with two paradigms: the one of the democratization via print and that of the immediacy of  knowledge and  relations! The theories of Carl Rogers, Paul Watzlawick, James Hillman, Wilber Ken, Joseph Campbell and a few others gave selfpraise's development its theoretical framework.

Beyond this journey: an aesthetic and a mandate. The aesthetics of sobriety: beauty is simple, as "obvious". What is well conceived is easily stated, ... What is more refined than this practice that holds three instructions whose last is quickly useless: a statement containing "I", amplified, and without lies?

It is undoubtedly the mandate received from my deceased grandmother that animates this construction for me "you will have the words that I did not dare say". And of course the cellular love  that I carry to living poetry, the one where words vibrate with life, help to live. I can not bring myself to believe that only a handful of supreme poets have echoed (Georges Steiner) the presumed power in the immediate relation between the word and the world. I left the path of elitist excellence to descend into the primitive word and found it in everyone. Our most precious asset is not at the end of an incessant and for ever more demanding quest but coiled up - waiting patiently - in each one of us .

It is in this intimate place where "I" is made "us" that is written and self-love is proclaimed. I like the unique hyper, singular, committed, pictorial act without equal. And I have dedicated my life to producing the spark of life in everyone and especially among the most deprived. I discovered that when a person declaries himself/herself in his/her singularity, not only does that person radiate but naturally his/her words belong to everyone they resonate with. The "I" of the speaker becomes the "I" of the listener.

It is in that  magic of  meeting one another, beyond the biographies and all the anecdotes that constitute a life, that there is fluidity between one and the other, up to a point where it one and the other can become undistinguishable. Not as if they were an undifferentiated blur, a mixture of great confusion. No! But an acuity of such precision, with contrasting contours and determined reliefs where both in their singularities are perceived in resonance. Selfpraise is poetry in these  times of change, a practice of public health.

Marie Milis, Develop self-confidence through « autolouange » (inner/selfpraise) and empower yourself in the learning process